Lyttle was an early collector and producer of LSD blotter art. He is the person who first conceived of asking psychedelic celebrities like Albert Hofmann, Timothy Leary, Sasha Shulgin, Annie Sprinkle, Peter Fonda, Alex Grey, Laurence Gartel, HR Giger, and others to autograph undipped sheets of blotter. This action inspired increased interest of blotter as an art form. Signed blotter became highly collectible, with rare sheets selling for hundreds or thousands of dollars. Before his death, Lyttle donated some of his more valuable pieces of blotter art to the Multidisciplinary Association for Psychedelic Studies, and the sale of autographed blotter raised around $20,000 for MAPS. 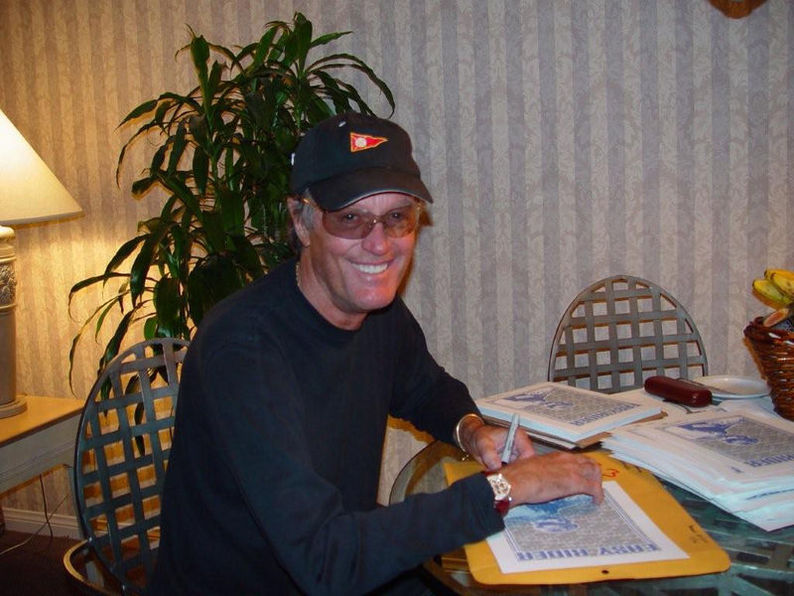 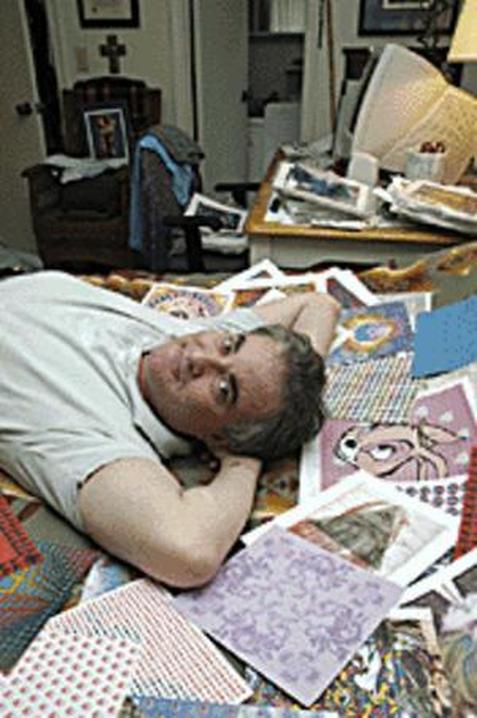 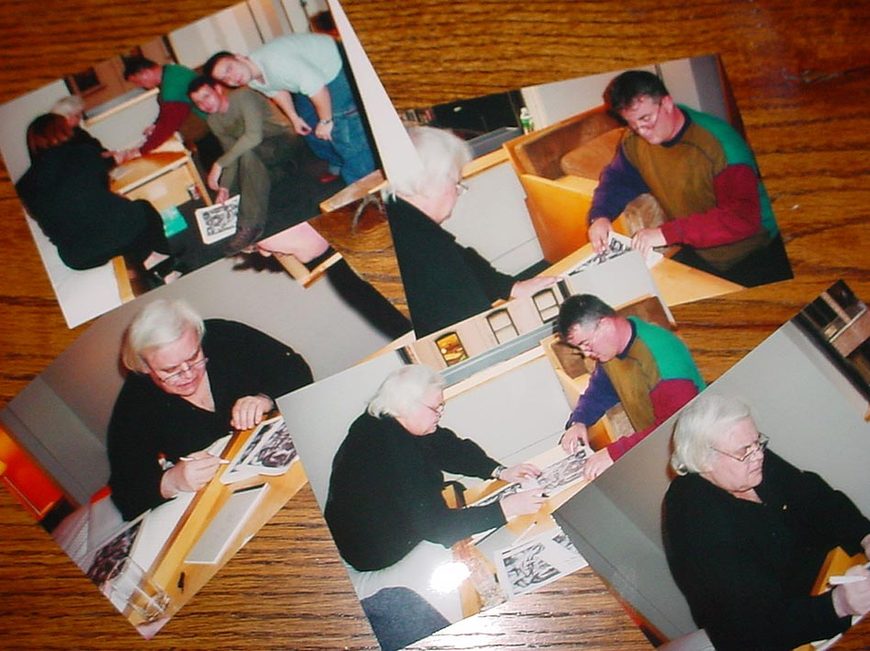 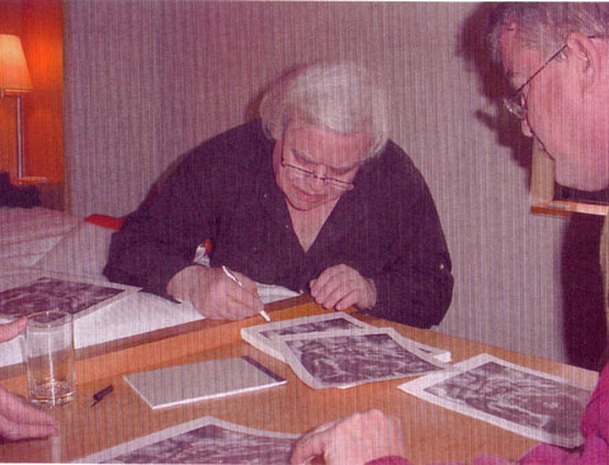 Had a private meeting with H. R. Giger in his Madison Avenue hotel suite & saw old friends. Sorry if sequence events out of order, I am exhausted.

Giger signed 500 of my "Illuminatus I" blotter-sheets. Then my production partner Jon  B. had also flown in meeting us with the the 750 signed art-prints, perforated fresh off the press, took high-res digital photos of everything going on, matted & framed same for sale at Fuse Gallery that same one-hour window... Fuse is Giger's "chic fetish" gallery host where the reception was about to occur until who knows what hours,  chic-dungeon atmosphere, to me so boring..

The door on the Fuse office was made out of of a coffin lid - I had to deal with the owners, plus Giger's agent in this surreal atmosphere. I stood perfect in my David Lynch "Mr. Normal" disguise. With fetish everywhere to the max, I had on a nice Italian suite, $100.00 tie,  $300 shoes, etc.

Someone asked me if I was there to "audit the place". I thought about 5 years ago, with $5 bucks in my pocket, no car, no job, no wife, washed up on a beach.... who  really are my friends. I'd call it a near-death experience except is was really more like a "near-life" experience. A waking moment.

As I entered Giger's hotel room, he emerged out of a ongoing biz meeting, some Euro- marketing clusterf**k in front of computer screens with Barany, Gigers agent also present.

H. R. Giger walked straight to me and shook my hand. We locked eyes. I said  you are still busy sir, let me come back. I left, then returned in an hour after he wrapped up with the Euro toy company. These folks saw us in the lobby as they we leaving.

Once alone, I asked Giger the questions everyone else was either to fearful or too stupid to ask. He was charming,  brilliant while staying vulnerable. Still searching. A force even at 65.

I thought we had a bit in common.

Are you a Satanist?

Do you go into vision, to achieve your art?

What is your relationship to Crowley?

What is your relationship to Salvador Dali?

Do you know what LSD is?

Giger drew some numerological sequences out and talked about what was happening, all of our meetings, the tarot and Giger's tarot, Frieda Harris, Dali & Gigers birthdates etc. His fave number being 5, my date if birth being 5-5-55... that tact.

Then Giger signed my LSD "Illuminatus" blotter-sheets, and his agent suggested several more contracts between me and famous artists, circles-within-circles. About two hours into it, we left & wen back  to Stahlman's loft on 20th St., ate delivered Chinese and drank wine and talked about New Media, the occult of which Mr. Stahlman knows quite a bit. The CIA also of which Mr. Stahman demonstrated some knowledge, and Marshall McLuhan. We had a few laughs. MS's girlfriend arrived.

We then all shared a cab to the RSVP event.

Giger is like a rock star it was a mob scene everywhere. 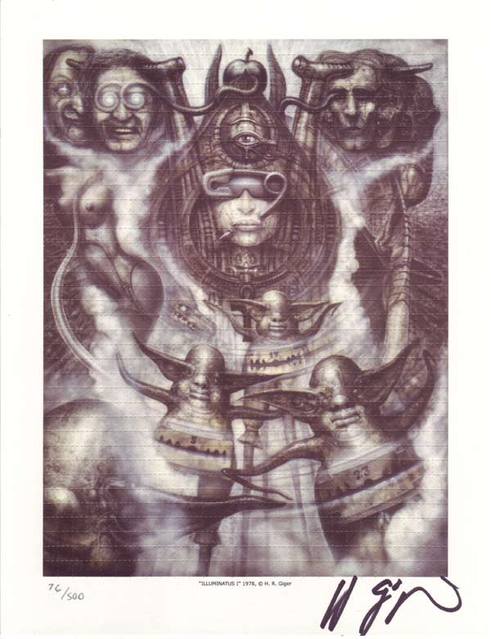 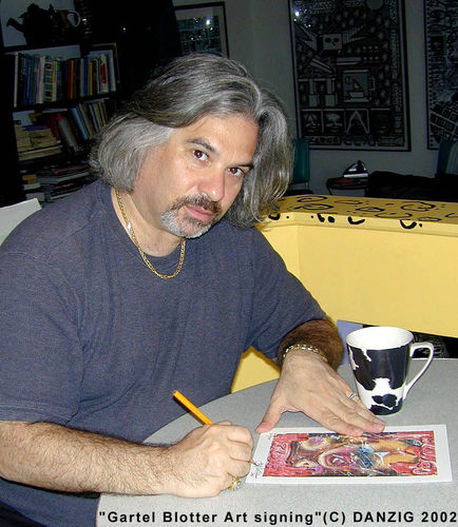 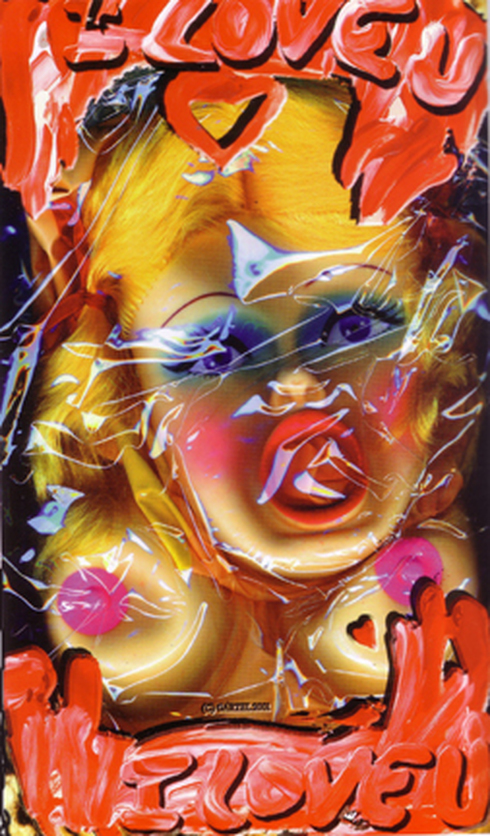 The last of the body meditations are designed to overcome one's narcissistic infatuation for one's own body, to abandon unrealistic desires for immortality, and to destroy sensual lust. To achieve these ends two principles are employed. First is vividly and repeatedly impressing upon one's mind the temporary, changing, and compounded nature of the body. Secondly one establishes and persistently reinforces a series of negative associations to the usually sensual features of the body. This latter process employs the same principles as behaviour therapy and Pavlovian conditioning. However, Satipatthana differs from Pavlovian and behaviour therapy in that the conditioning is established by the meditator himself instead of an external agent. Thus the Satipatthana Sutta continues:

This last paragraph is explained in the Visuddhimagga:

Similar meditations on the digestion and decomposition of food are listed in other sections of the Pali scriptures for the purpose of freeing the practitioner from undue cravings for food:

When a monk devotes himself to this perception of repulsiveness in nutriment, his mind retreats, retracts and recoils from craving for flavours. He nourishes himself with nutriment without vanity....[27]

While these meditations are intended to eliminate passion and craving they carry the risk of making one morbid and depressed. Therefore the Buddha recommended:

If in the contemplation of the body, bodily agitation, or mental lassitude or distraction should arise in the meditator, then he should turn his mind to a gladdening subject. Having done so, joy will arise in him.[28]

A cartoon in an American medical magazine shows four senior medical students standing together. Three are engaged in active conversation. Only the remaining one turns his head to take notice of a pretty nurse. The caption beneath the cartoon reads: "Guess which one has not done twelve pelvic examinations today." It is doubtful that many persons outside of the medical profession will appreciate the meaning, but to medical students and interns it speaks a reality. During his months of training in obstetrics and gynaecology the medical trainee must spend many hours engaged in examining and handling the most repulsive aspects of female genitals. As a result he finds the female body becoming less attractive and his sexual urges diminishing. During my own years as a medical student and intern, this observation was repeatedly confirmed by the comments of my co-workers, both married and single. As we have seen, the same principle is utilized in the sections of the Discourse on repulsiveness and the cemetery meditations.Other aspects of scientific and medical training can produce results similar to those sought in the latter three body meditations. Chemistry, biochemistry, and histology foster an objective way of viewing the body which is virtually identical to the contemplation of elements. Anatomy, of course, is similar to the contemplation of repulsiveness. And in hospital training the persistent encounter with old age, debilitation, and death continuously reinforces the words of the cemetery meditations: "Verily, also my own body is of the same nature; such it will become and will not escape it." Similarly, in order to acquire a vivid mental image of the cemetery meditations, Buddhist monks occasionally visit graveyards to behold corpses in various stages of decay.[29] However, such experiences bear fruit only if one takes advantage of them and avoids the temptation to ignore and forget.